Kitetsu Swords or Kitetsutos (鬼鉄刀, Kitetsutō, lit. Demon Metal Blade) are weapons that are made of Kitetsu, Oni Iron. Onis can be killed only by these weapons. Kitetsutos can come in various forms.

Significance of the Kitetsu Swords Edit

Obtaining a Kitetsu Sword is easy since they are sold in markets but among Bushis getting the very first weapon is as meaningful as the Coming of Age Ceremony because it indicates that one has become to a full-fledged warrior and are able to fight against Onis. It’s believed that the sentiments of the Kitetsu Sword’s wielder dwell in the weapon that’s why after a Bushi’s death these swords become an important keepsakes to the family.[1] 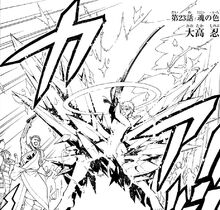 To acquire a Kitetsu Sword one has to go through the Sword’s Trial (刀の試し, Katana no tameshi) that settles who are going to be able to become Bushi. It’s usually decided in the moment when someone holds the Kitetsuto. The feeling is described like a near-death experience when memories from the past are being displayed. When the ritual ends light wraps around the sword and colorful gemstones sprout from one’s body. [2]

When successfully being chosen, the crystals color will shine and reflect the color of their soul which in turn decides their abilities.

Retrieved from "https://orient.fandom.com/wiki/Kitetsu_Sword?oldid=1790"
Community content is available under CC-BY-SA unless otherwise noted.